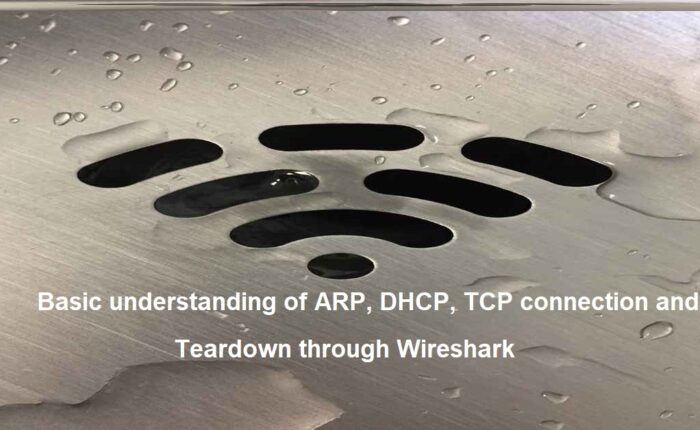 Here are we are going learn about basic of Address Resolution Protocol (ARP), Dynamic Host Configuration Protocol (DHCP), Transmission Control Protocol (TCP) connection and TCP teardown. Wireshark protocol analyzer will be used to show the packet exchanges for these protocols.

Wireshark is open source free networking tool. It can be downloaded for any operating system. After it’s installed, here is the first screen of Wireshark.

To load any capture, go to Edit->Open and select the required capture to be displayed into Wireshark.

Once any capture is loaded it will look like this.

Now let’s understand some protocols and see packets into Wireshark.

So there should be two packets exchanges if someone has the requested IP in ARP request.

Here is the screenshot in Wireshark after using filter “arp”.

Packet number 1 is Arp Request and packet number 2 is Arp Reply. Now if we take information from capture and put it in diagram, it will look like this.

ARP Request is the first packet which is sent from the device which is looking for MAC address.

Here is the screenshot of ARP request packet with inside fields.

ARP Reply is the packet which is sent from the device which has received the query in ARP request.

Here is the screenshot of ARP reply packet with inside fields.

Protocol standard for ARP is https://tools.ietf.org/html/rfc6747

In simple sentence, DHCP is a process to get IP address from Server. There are mainly 4 packets exchanges in DHCP.

Note: These are mainly broadcast but these packets can be sent as unicast in some scenarios.

Let’s see these packets in Wireshark. We can use filter name as “bootp” to get DHCP packets

Here is the screenshot to explain about important fields of DHCP discover packet.

From above packet we can understand that DHCP discover is a broadcast packet asking for IP address for client.

2. DHCP Offer:
Here is the screenshot to explain about important fields of DHCP offer packet.

Here is the screenshot to explain about important fields of DHCP request packet.

Here is the screenshot to explain about important fields of DHCP ACK packet.

Now the question comes what happens after 1 day. Client does DHCP renewal. For DHCP renewal there are 2 frame exchanges

But the difference is here DHCP Request is unicast packet because client knows its server. DHCP ACK is broadcast as usual.

Protocol standard for DHCP is https://tools.ietf.org/html/rfc2131

Transmission Control Protocol is a major protocol in Transport layer. Client and server have to exchange 3 packets to establish TCP connection. We can call it’s a TCP 3-way handshake.

Let’s see all three packets from Wireshark. We can use filter “tcp” to list out all tcp packets and the first 3 packets should be the 3-way hand shake packet. Have a look on below screenshot.

Now server share it’s capabilities to client through SYN+ACK packet. So this packet is acknowledgement of SYN packet and also sharing server’s capabilities.

Here is the screenshot

If we compare SYN and SYN+ACK packet we can see differences between client’s and server’s capabilities. These informations are useful when client and server shares TCP data packets.

Here is the screenshot of ACK packet

This packet is just the acknowledgement from client.

Note: FIN packet is sent as FIN+ACK to indicate that this FIN packet also the ACK of any previous packet. Do not get confused.

There is no important information inside FIN and ACK packet as this indicates TCP connection termination.

Here is the screenshot for FIN packet

In reply to FIN, only ACK packet is sent as an acknowledgement. Here is the screenshot of ACK packet.

Protocol standard for TCP is https://tools.ietf.org/html/rfc793

From the above article we got basic idea about ARP, DHCP, TCP protocol and their important fields in Wireshark. For deep dive we can go through the shared RFC link.