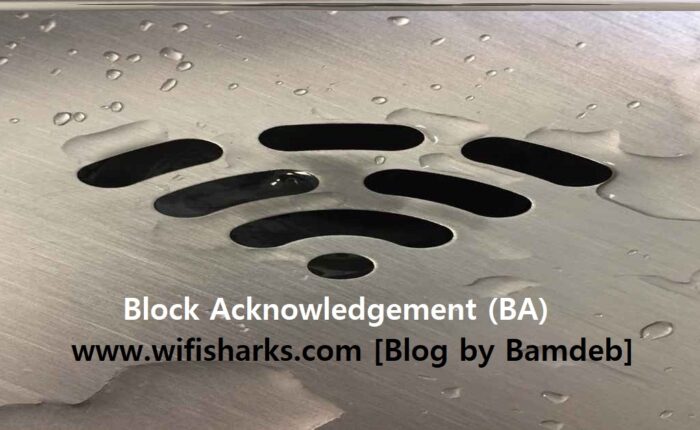 ♣ What is Block Acknowledge ment (BA)?

Block Acknowledgement is a mechanism to acknowledge one or more Data frame(s) present within A-MPDU.

♣ From which IEEE standard BA was introduced?

♣ Which layer feature is BA?

♣ Which Data Rate BA is sent?

BA is sent at highest basic data rate. Generally we have observed that BA is sent at 24Mbps. This may vary depending upon test configurations.

Let’s understand from where we get this 24Mbps.

Follow below screenshot for STA and AP connection and then observe the BA data rate.

So we have observed that highest basic rate is 24Mbps mentioned in Beacon and Association response.

So we can see BA data rate is 24Mbps.

Here is the basic frame format for a BA.

Let’s see the below screenshot for understanding each field of BA.

♦♦ BA policy is always set to “No Acknowledgement” for BA because BA does not any further ACK. BA itself is the ACK for A-MPDU.

♦♦ Why Compressed BA is used instead of Normal BA?

Remember Aggregation (Here A-MPDU) and Fragmentation is reserve scenario. Aggregation means bundle more data together where as fragmentation means breaking data into pieces. As A-MPDU is used with BA, there is no fragmented data present inside A-MPDU.

♣ What is BAR (Block ACK Request)?

In general, BA is sent immediately after A-MPDU is received. But we may see some device send BAR to ask acknowledgement for some MSDU with one starting sequence number.

Let’s see one sniffer capture where BAR is sent.

First of all, there may be slight different BA Bitmap mechanism used by different Wi-Fi devices. Here we are going to see the simple method used to indicate whether receiver has received MPDU or not.

We will take one example from capture and explain. Let’s follow screenshot and explanation.

Now BA is sent from receiver where

So BA is telling

“I am acknowledging MPDUs with starting sequence number is 1678.

As sequence number 1684 is not received so transmitter has to resend it.

We can see in screenshot that 1684 is included in next A-MPDU.

And BA starting sequence number is 1684.

If we use Step1 calculation then we get this

1684 is received and 1685 is mentioned as missing because it was already received in last A-MPDU.

Using this method we can try to calculate BA compressed Bitmap for received or not received MPDUs.

♣ Is MPDU retry bit set to indicate if that MPDU is retried or not? If answer is not, then why is that?

Maximum scenario, I have observed MPDU retry bit is not set for retransmitted MPDU. Using BA compressed bit map calculation we can find out. So, retry bit set is not helpful here.

But, I have observed some vendor set retry bit for MPDU if it’s retransmitted. So, its implementation depended.

Here is the screenshot for our scenario. Retried bit is not set.

Block Acknowledgement is a strong feature for 802.11n and 802.11ac and newer IEEE standards to improve wireless throughput significantly. I hope this article helps to debug BA and A-MPDU throughput related issues.

I have one doubt. Could you please respond with answer. Thanks in advance.

I think this question is based on some sniffer analysis.

I can understand partially but not completely. If i can see sniffer capture, it would very easy to answer it.

And then mention the packet numbers for your observation.